Angelika Höger (DE) is a german artist based in Bielefeld, North-Rhine Westphalia, Germany who was on resident at The Guesthouse in collaboration with the library in October 2014. Höger works in kinetic sculpture and installation, often with found domestic objects; a practice she calls ‘Housewife Engineering’. Over an introductory drink Myself and Angelika had been discussing our ideal reading space and I brought her to a favourite cafe of mine in Cork, The Webworkhouse (www.webworkhouse.com). Most commonly frequented by travellers and local students, the Webworkhouse cafe provides a constant background hum of indiscernible foreign chatter that I find conducive to a good read. Angelika had expressed an interest in working with The LFTT library as an installation which I was of course interested in, as one of the primary reasons for the ‘new build’ of the shelving system would be to make the structure more malleable as building material. This initial intervention (although modest) instantly made visible further possibilities for alternative functions of the libraries modular architecture. The LFTT ‘Internet Cafe’ included cafe style seating; the photocopy station and lounge area; an international maps wall (to provide orientation) and the internet space itself – two pcs, which in place of streaming the information superhighway which is the world wide web were screening Angelika’s two part video work ‘Laufzeitanalyse’ in which one snail and a group of snails traverse a hamster wheel at a speed barely perceptible to the human eye, foraging on a piece of garden lettuce. Humourous, playful, and visually-philosophically succinct, this work was in keeping with subverting the expected function of the environment and its materials.

“This two videoloops show a breadboard construction. In part one a snail is creeping in a hamsterwheel covered with salad leafs to make it more comfortable for her. The snail is moving very slowly but constantly for nearly one hour. You can hardly see the wheel moving. Of course the snail stays always in the lower section of the turning wheel. The cross-tie of the wheel is turning slowly around, reminding a bit of a clock hand. In part two nine snails are creeping inside the same hamsterwheel. One goes left, one right, one starts to creep upwards, another stucks at the ground … The wheel is moving even more slow, sometimes it doesn´t move at all, sometimes it turns to the other direction. I used to show part one and part two at the same time side by side or on top of each other. A nice chance to watch the potentialization of slowness”

The lounge area with photocopy station.

In the photocopier – a self published newspaper of the works of ‘Artist Unlimited’ – the live/work collective where Angelika stays in Bielefeld. http://www.artists-unlimited.de/ 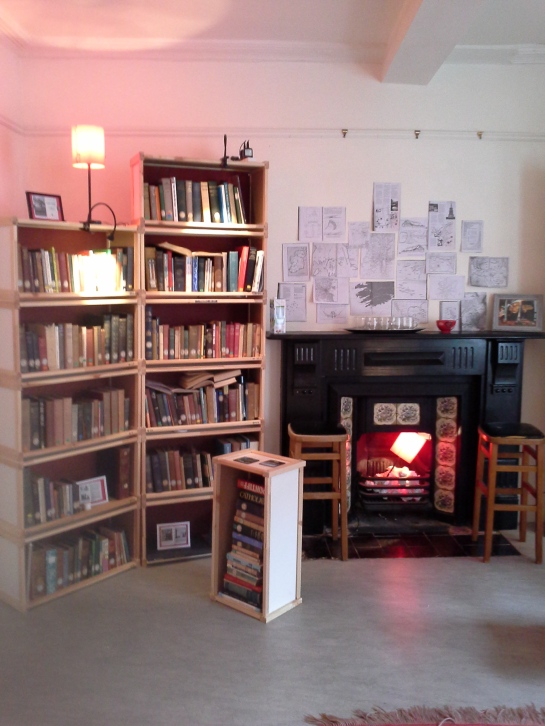 The international maps wall (for orientation).